An industrial espionage, a commercial secret, an economical intelligence – all these terms are associated in our heads with military spies, intelligence agents, top secret national secrets and with all things we should not talk about. And no wonder…

Nowadays the competition is a real war between large industrial giants. The fight between companies is so serious and cruel, that’s why methods of real wars are used for a very long time. Companies steal and copy a data and products, recruit employees and send their agents, blackmail and blatantly deny any illegal actions from their sides.

The term “industrial espionage” is used along with the term economical intelligence. The main object of industrial espionage is a commercial secret. A commercial secret is the information about production, trade, research and financial activity of the company, which gives it special advantages over competitors, who don’t have such information. This information is not well-known and it isn’t always a property of one owner only. The leakage of such information, first of all to the competitors, can lead to very serious consequences for the company. The advantages before the competitors obtained by owning special information can consist of the ability to produce goods with the unique quality or usage, providing high profit for the company. Significant resources spent on receiving secret information or a fact of selling special license can testify the value of that information. The value of saving secret information can be identified by the size of the damage from unauthorized disclosure of data.

The information is not necessarily in property of only one owner: competitor companies can receive it accidentally, prove it logically, buy and etc. the same data, which can become their commercial secret under some conditions.

There are few types of data which can be referred to a commercial secret: conceptual, organizational, technological, parametric and operating information.

There are different approaches to protect different data. Determining of mentioned types of data helps to identify it, then to develop special effective ways of its protection, analyze reasons of its leakage and minimize consequences of its disclosure.

There are different sources and holders of commercial secrets: workers of the company, company’s documents, storage devices, technics, samples of products, wastes, publications.

The value of data the worker responds to depends on his professional position. “Know-how” is exactly in the brain of a worker. However the worker can become a person who performs unauthorized access to the commercial secret, making conditions for the disclosure on purpose or because of carelessness.

The industrial espionage is a form of unfair competition, when somebody realizes unauthorized receipt, usage, disclosure of data which is a commercial, official or protected by law secret with the goal of having advantages and a profit.

Different methods are used for gathering data. Due to the limit of legal methods some competitors often use unfair methods in conditions of serious competition.

There are such methods among them:

Some curious cases occur through the course of history. It was 1981. Arcades were hot. MTV launched…and so did the first Columbia Space Shuttle. The Osborne 1, the first portable computer, was unveiled at a computer fair on the West Coast. Things were technologically simpler in the pre-Internet era, but corporations were still stealing secrets. In a corporate espionage case the press dubbed “Japscam,” Hitachi somehow came into possession of several of IBM’s workbooks. The documents contained designs and technical secrets. FBI and IBM counterintelligence arrested several high-ranking IBM officials. The intellectual property dispute was settled out of court when IBM agreed to pay Hitachi $300 million.

The advanced manufacturing plant in Kameyama, where Sharp manufactures liquid crystal display (LCD) panels and TVs, sits in a remote mountain range, safely out of view of most prying eyes. But a mysterious car has been seen, once a month, outside the site that is home to the Japanese groups closely guarded secrets of advanced LCD production. Although the sightings of the car are not evidence that a rival company has been in search of sensitive information, they are nevertheless a reminder of the challenges that Japanese high- technology companies face in protecting their most valuable trade secrets.

When it comes to industrial espionage, Japanese companies have long been better known as defendants in high-profile cases. Despite that, the Japanese government detained Takashi Okamoto, a Japanese scientist charged in the US with stealing genetic material on Alzheimer’s disease some years ago. The case, which is the first time the US Economic Espionage Act has been used, has led to changes in Japanese domestic law as well. In response to growing alarm in the business community, the Japanese government enacted legislation this month to make it a criminal offence to leak corporate trade secrets.

‘The flow of technology out of Japan is leading to a decline in competitiveness and in employment,’ says Yoshinori Komiya, director of the intellectual property policy office at the Ministry of Economy, Trade and Industry (Meti). ‘We believe that there is some technology that should be transferred, but what is happening now is that technology that top management does not want transferred is getting passed on,’ he says.

The problem is a highly sensitive one for the Japanese government, but is attracting attention as Japan’s neighbors in Asia gain skills as manufacturers of high technology goods, forcing even the best Japanese companies on to the defensive. Consequently, intellectual property has become critical to Japanese companies in differentiating their products and keeping ahead of the competition. ‘We are taking many measures to prevent technology leakage,’ says Yukio Shotoku, executive vice-president of Matsushita. Rival Sony says: ‘We would certainly welcome a regulatory system to protect intellectual property in countries such as China and South Korea.’

Another case happened in April 2009, Starwood Hotels & Resorts Worldwide filed a corporate espionage suit against Hilton, forcing the hotel chain to stop the development of its Denizen brand. The lawsuit claimed that two former Starwood executives hired by Hilton stole more than 100,000 confidential documents. The documents had information about Starwood’s W chain, and according to the lawsuit they were going to be used to assist Hilton in replicating Starwood’s niche of «lifestyle hotels.» Starwood said the “truckload” of documents contained “competitively sensitive information.” The hotel chains reached a settlement in 2010. Hilton agreed to make a $75 million dollar cash payment to Starwood, and a federal judge prohibited the hotel chain from opening any «lifestyle hotels» for two years.

Another case is Europe against Asia. In opinion of German governors the most favorite method of Chinese companies is recruitment of young Chinese workers, who have practiced in foreign companies. That’s why German managers have to be very careful when they make a decision to invite Chinese specialists.

The informational intelligence of Chinese people gives good results. If we look back, few years ago Chinese companies tried to copy only German dish and stationery, so now they produce cars very similar to the German models.

Not so long time ago there was a big quarrel in Frankfurt car salon. Chinese car manufacturer Shuanghuan presented its new off-road car CEO, which was suspiciously similar to the BMW X3. Chinese company ignored all protests of German company.

Few months before was another case: German blogger Ron Hillman wrote a critical article in his life journal about a suspicious similarity of a new Chinese bus Zhongwei with German Neoplan. After that he received an invitation to the Chinese court. Zhongwei company blamed blogger in damage of business reputation. Such behavior represents extreme self-confidence of Chinese companies.  They changed an international term Copyright to the term Right to copy.

There are different methods of Internet-breaks used in the industrial espionage. All of them are mostly directed to stealing of useful information and also the damaging of data, stopping the commercial activity and damaging business reputation. 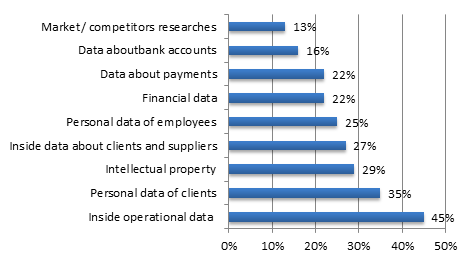 On the picture 1 we can see the main kinds of stolen information from web-sites and databases of large companies.

One example of a major cyber-attack is a case happened with the Microsoft Company. In 2004 Microsoft Company said about the theft of the operating system code. 600 million bytes of data, 31 thousand of files and 13,5 million code lines were stolen. Firstly the Company said that files were stolen from the partner company Mainsoft, however later Microsoft declared that the data was stolen directly from the Microsoft network. There was not serious damage because the company refused to use this version of operating system. Anyway, neither the company, nor FBI hadn’t caught the attackers. And this fact made serious reputational risks for the company.

During the last five years the quantity of informational leakage increased at more than 75 percent. Unfortunately, most of Internet resources can be broken without critical efforts. This problem is very serious for the World community, because the stealing of information can lead to very bad consequences. Every company has to care about its informational and commercial secrets security. Nowadays the competition is so serious that unfair competitors can use all the methods for achieving the success.

While legal measures and legislations that send strong messages against espionage can be effective in preventing its occurrence, the role and responsibility of corporations is crucial. Even as companies take a non-serious approach to espionage, there is little debate that companies should guard themselves effectively against the ‘info-thieves’, both insiders and those unleashed by outsiders, who try to get secrets by all possible means. Measures that may help companies to prevent espionage include:

In conclusion we can see that the tendency between developed countries is clear. All the large companies compete on the global market and try to find the ways how to destroy rivals and become a monopoly.

In my opinion a competition should represent new ideas and technologies, progress in the production, development of systems and skills of staff and etc. The competitive intelligence using legal methods of receiving the information is enough to have a development in doing business.